Below is a list of publications by date, with links where available. For academic papers that are only accessible via a university library, I have also included a pdf of an earlier version.

‘Where is the Opposition? – a weekly news review’ Medyanews 10 April

‘Where will you be when Turkey murders democracy? – a letter to all democrats’ Bella Caledonia 18 March

‘Erdoğan on the warpath – a weekly news review’ Medyanews 20 February

‘Choosing not to see fascism – a weekly review’ Medyanews 17 January

‘Waking up to Turkish Aggression – a news review’ Medyanews 24 December

‘All Quiet on the Kurdish Front’ Medyanews 1 December

‘What Happened to the Yazidis?’ Medyanews 26 November

‘World Kobane Day: Why we should all know what Kobane Day means’ Sunday National 1 November

‘From Blairgowrie to the Black Sea – Strawberries and Nutella, and the capitalist mode of agricultural production’ Bella Caledonia 13 September

‘Denied freedom of thought and action, but Kurds are fighting back in Iran’ Sunday National 6 September

‘After the Deluge’ Source 15 April

‘Why the Kurds were branded “Terrorists”‘ The National 23 February

‘Civic Scotland is adding its voice to Turkey boycott’ The National, 27 October

‘The resistance goes on’ Commonspace, 18 October

‘The Kurdish Question – a poem for Rojava‘ Bella Caledonia, 16 October

‘The dangers of allowing reversals of democracy to be normalised’ The National, 25 August

‘Hope Vs Fascism in Syria and Iraq’ Commonspace, 24 July

‘The independence movement cannot afford to be neutral on the smearing of Jeremy Corbyn’ Common Space, 19 July

‘Turkey’s Ilisu Dam is a war on culture and nature with catastrophic consequences’ The National, 14 July

‘Lessons for the West from the East: the Kurdish democratic experiment’ Scottish Left Review, July/August

‘Victory for the Kurdish hunger strikers – but what next?’ Common Space, 29 May

‘Hunger strikes are over but the Kurds need our support all the more’ The National, 27 May

‘When it’s normal spending years in prison… the lives of Kurds in Turkey’The National, 5 May

‘Turkish thumbs down to Erdogan, thanks to Kurdish election strategy’Common Space, 1 April

‘Write a letter in support of the Kurdish hunger strikers’ Common Space, 29 March

‘The plight of Kurdish hunger strikers grows – we must not ignore them’ The National, 24 March

‘As the hunger strike rolls on, let’s join the Kurds in a celebration of resistance’ Common Space, 21 March

‘Meeting the Kurdish hunger strikers in Strasbourg has restored my belief in humanity’ Morning Star, 28 February

‘”We love life so much that we are ready to die for it”: Sarah Glynn from Scottish Solidarity with Kurdistan visits the Kurdish hunger strikers in Strasbourg’, The National, 10 February

‘Women Life Freedom!’: What I found on my visit to the Women’s revolution in Northern Syria’ Common Space, 28 August

‘Turkey on a knife edge as elections loom’ The National, 22 June

‘Resistance is life: The Kurdish fight for freedom’ The National, 23 May

‘Meet the working class hero Turkey is trying to rip away from the Kurds’ Common Space, 23 March

‘Why we must stand up for the hope of Rojava’, The National, 6 February

‘Hopes for 2018’ Bella Caledonia, 6 January. (Please scroll down to find my contribution.)

‘Scotland must rise up against Universal Credit’ Bella Caledonia, 19 November

‘de-FENCE-ible space’ in All Materials of Value: Responses to walking in Salford, edited by John Van Aitken and Jane Brake, Manchester: Institute of Urban Dreaming. (An essay in pictures.) Draft pdf: de-FENCE-ible space

‘Talking about Rojava – reflections on the recent international conference on Challenging Capitalist Modernity organised by the Kurdish community in Hamburg’, Bella Caledonia, 4 August

‘On the front line of the battle for benefits’ Bella Caledonia, 12 May

‘We must put grassroots activism at the centre of the Indy campaign’ Common Space, 4 April

‘Spring is always the bleakest time for those forced to rely on benefits’, The National, 1 April

Righting Welfare Wrongs: Dispatches and Analyses from the Front Line of the Fight against Austerity (Editor) Glasgow: Common Print (I edited this for the Scottish Unemployed Workers’ Network, and wrote several of the chapters.) Buy from Common Print here. download free e-book here.

Warning – this book will make you angry!

This volume has been forged through grassroots activism by and with people at the sharp end of ‘welfare reform’. It illuminates everyday battles to maintain human dignity and even existence in the face of the new punitive welfare state. It is about solidarity and mutual support, but it is also about understanding and taking on the bigger politics behind this brave new world of coercion and control. It has been written for everyone who wants to comprehend what is happening and what we can do about it – and maybe even have a laugh along the way.

‘I am convinced that the network must have saved many vulnerable people from going over the edge, as has tragically happened in many parts of the country. I am not surprised now that this same group has written this marvellous book.’ – Paul Laverty, Screenwriter for ‘I, Daniel Blake’

‘More than ever we need to show our support for Kurds and others under threat around the world’, Common Space, 15 November

‘The anger over ‘I, Daniel Blake’ needs to turn into action – here’s how it can’, Common Space, 31 October

‘Why we must resist the “work cure”‘, Common Space, 12 October

‘This is what democracy looks like: Sarah Glynn – member of Scottish Solidarity with Kurdistan was part of a Scottish delegation to the Democratic Union Party Congress in Brussels, discussing the democratic federalist system they are establishing in the autonomous predominantly Kurdish part of Northern Syria, Bella Caledonia, 30 September

‘What Scotland can learn about democracy from Syrian Kurdistan’, Common Space, 28 September

Byker: Newcastle upon Tyne (with photographs by Keith Collie), Canterbury: Categorical Books. Pdf of text only: Good Homes – text only

New Byker, the Newcastle council estate conceived by Ralph Erskine in the late 1960s, demonstrates the potential for humane and imaginative affordable rented social housing – and the pitfalls of insensitive management and hostile economic and political forces. Its fame as an example of public participation and preservation of the existing community hides a rather more complex reality; but it also obscures the innovation and success of its layout and landscaping, with external spaces planned for social interaction. Erskine’s Byker is visibly unique and still attracts architectural tourists from across the world, but it is designed for living in. Many of those tourists must be shocked at the obvious signs of neglect of this iconic estate, and these reflect the long-term socio-economic neglect of its inhabitants. Architectural listing has opened possibilities of physical regeneration, but with social housing itself under attack, the future of the community remains uncertain. Sarah Glynn’s text looks in detail at the processes through which Erskine’s Byker emerged and developed, and the lessons to be garnered, architecturally, socially and politically. Keith Collie’s photographs capture the visual excitement and pleasure of one of the country’s finest surviving large-scale council estates.

‘The response to “Islamic extremism” that governments don’t want to hear’. Blog for Manchester university Press,

This exploration of one of the most concentrated immigrant communities in Britain combines a fascinating narrative history, an original theoretical analysis of the evolving relationship between progressive left politics and ethnic minorities, and an incisive critique of political multiculturalism. It recounts and analyses the experiences of many of those who took part in over six decades of political history that range over secular nationalism, trade unionism, black radicalism, mainstream local politics, Islamism and the rise and fall of the Respect Coalition. Through this Bengali case study and examples from wider immigrant politics, it traces the development and adoption of the concepts of popular frontism, revolutionary stages theory and identity politics. It demonstrates how these theories and tactics have cut across class-based organisation and acted as an impediment to addressing socio-economic inequality; and it argues for a left materialist alternative.

Housing for a Better Nation, policy paper for Common Weal

‘The Case for Public Housing’ The Occupied Times

‘You can’t demolish your way out of a housing crisis: A Scottish case study of what happens when neoliberalism becomes built into legislation’, City:analysis of urban trends, culture, theory, policy, action 16:6 pp 656-671. Pdf of earlier version: Mass Demolitions and Growing Housing Waiting Lists

‘Blowing up the Past, Destroying the Future’, New Left Project

Where the other half lives: lower-income housing in a neoliberal world (Editor) London: Pluto Press (As well as editing this, I wrote 6 out of 13 chapters.) 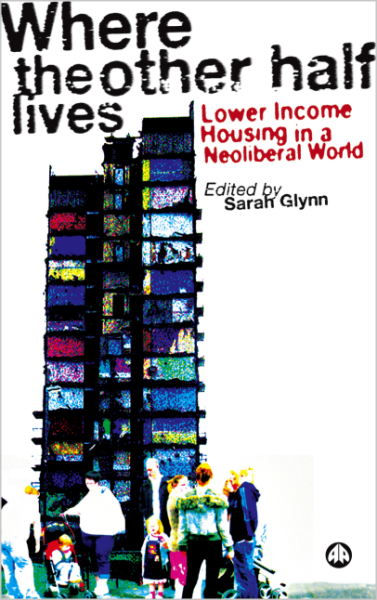 ‘To feel secure people need good well maintained housing, where they know they can live without fear of having to leave. Our society has consistently failed to provide this. We are told the market will be the answer, but it isn’t. This book will explain why, and point the way to a socially responsible economy’ – Ken Loach

‘This book is a brilliant, compulsive and passionately written case for the continued importance of council housing’ – Mute Magazine

‘At last, a cross-national treatment – theoretical as well as empirical – of how neoliberalism has impacted housing policies and programs, and their effects on us all’ – Chester Hartman, Director of Research at the Poverty & Race Research Action Council in Washington, DC and Adjunct Professor of Sociology at George Washington University.

‘Provides a concise introduction to and a trenchant and impassioned critique of four decades of neoliberal housing policy; it challenges many of the invidious shibboleths of present-day development programmes, and begins the debate about alternatives based on the principles of equity and social justice’ – Professor Joe Doherty, Centre for Housing Research, University of St Andrews

‘Forcing councils to privatise and failing both to build social housing on a big scale or regenerate the estates has been the worst failure of our Labour government. Sarah Glynn and her contributors demonstrate the neoliberal legacy behind this and show the damage it inflicted on society’ – Austin Mitchell MP, Chair of the House of Commons Council Housing Group

This book demonstrates how neo-liberal policy makers have presented cities with a ‘false choice’ between degeneration …. It criticises the short-sightedness of policies of state-sponsored gentrification and the structural inequalities … This is a very readable and robust account of recent urban policy and its critical edge will no doubt challenge and enlighten its readers. – Professor Loretta Lees, Department of Geography in the School of Science and Public Policy, King’s College London.

‘Liberalising Islam: creating Brits of the Islamic Persuasion’ in Muslim Spaces of Hope: Geographies of Possibility in Britain and the West, Edited by Richard Phillips, London: Zed. Pdf of earlier version: Liberalising Islam

‘The Spirit of ’71 – how the Bangladeshi War of Independence has haunted Tower Hamlets’ Socialist History Journal 29 pp 56-75. Pdf of earlier version: The Spirit of 71

The Way We Worked: an oral history by members of St Hilda’s East Community Centre and Stepney Jewish Community Centre, St Hilda’s, London. (I organised the project, conducted the English interviews and edited the material for publication as a booklet.)

(Publications before 1996 are under my former married name of Tillotson.)

‘Havelis Today: Skeletons of an Extinct Culture’ in The India Magazine, March pp 18-27

‘There are people living today who will recognise in Sarah Tillotson’s narrative aspects of their own lifestyle, but most of us will read with astonishment and enlightenment of a way of life that has gone with the wind… Essential reading for the younger generation and for architects with a conscience.’ Narayani Gupta in India Today

‘The tourist: defender or destroyer; Preserving monuments’ in The India Magazine, March
pp 36-43